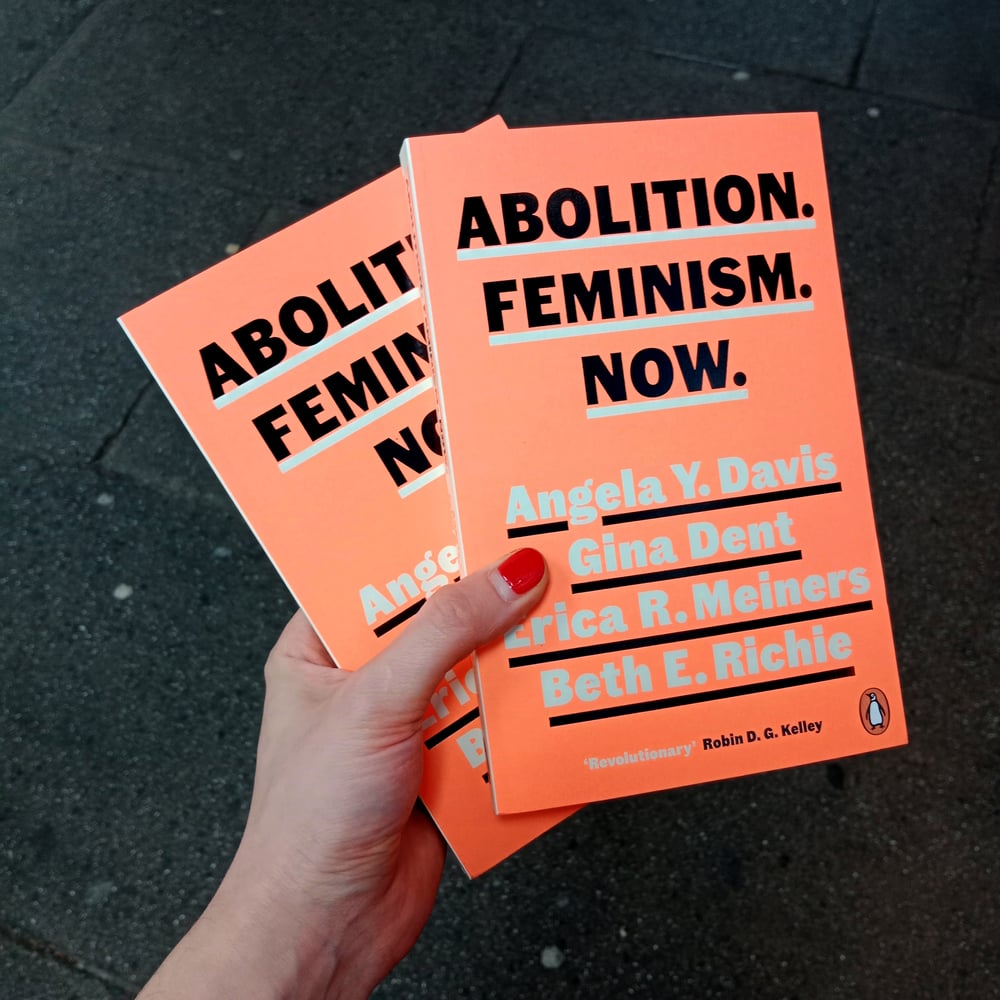 A powerful work from four activist scholars on the need for our thinking on
abolitionism and feminism to intersect. As a politics and as a practice,
abolitionism has increasingly shaped our political moment. Abolitionism and
feminism stand shoulder-to-shoulder in fighting a common cause: the end of the
carceral state, with its key role in perpetuating violence, both public and private,
in prisons, in police forces, and in people's homes. Abolitionist theories and
practices are at their most compelling when they are feminist; and a feminism
that is also abolitionist is the most inclusive and persuasive version of feminism
for these times.

Angela Y. Davis
Angela Y. Davis is a political activist, scholar, author, and speaker. She is an
outspoken advocate for the oppressed and exploited, writing on Black liberation,
prison abolition, the intersections of race, gender, and class, and international
solidarity with Palestine. She is the author of several books, including Women,
Race, and Class and Are Prisons Obsolete? She is the subject of the
acclaimed documentary Free Angela and All Political Prisoners and is
Distinguished Professor Emerita at the University of California, Santa Cruz.

Erica Meiners
Erica Meiners is a Professor of Education and Women's and Gender Studies at
Northeastern Illinois University and the author of several books, most recently
For the Children? Protecting Innocence in a Carceral State.

The Purple Color of Kurdish Politics: Women Politicians Write from Prison
£16.99
Mutant Ecologies: Manufacturing Life in the Age of Genomic Capital
£19.99
No! Against Adult Supremacy
£8.00
Lessons In Liberation: An Abolitionist Toolkit for Educators
£17.00
Democracy in the Political Present: A Queer-Feminist Theory
£17.99
Joyful Militancy: Building Thriving Resistance in Toxic Times
£13.00
Neuroqueer Heresies: Notes on the Neurodiversity Paradigm, Autistic Empowerment, and Postnormal Pos
£19.99
Disorganisation & Sex
£11.99
Rethinking Anarchy: Direct Action, Autonomy, Self-Management
£10.95
Living Rooms
£10.99
Nestor Makhno and Rural Anarchism in Ukraine, 1917-1921
£19.99
The Violence of Colonial Photography
£16.99
You Have Not Yet Been Defeated: Selected Writings 2011-2021
£12.99
Collective Amnesia: Falmouth and The Transatlantic Slave Trade
£0.01 - £5.00
A People's History of Catalonia
£16.99
The Uses of Disorder: Personal Identity and City Life
£9.99
Chav Solidarity
£10.00
Settler Colonialism: An Introduction
£16.99
Abolition Feminisms: Organizing, Survival, and Transformative Practice
£19.99
Self-Defense: A Philosophy of Violence
£17.99
Abolishing the Family: A manifesto for Care and Liberation
£2.00
Caps Lock: How Capitalism Took Hold of Graphic Design, and How to Escape from It
£22.50
From Transitional to Transformative Justice
£23.99
Straight Edge: A Clear-Headed Hardcore Punk History
£26.99
On Not Knowing : How to Love and Other Essays
£9.99
Mind Fuck: The Mass Psychology of Creeping Fascism
£6.00
Capitalism and Disability: Selected Writings by Marta Russell
£16.99
Decolonial Marxism
£16.99
Against Borders : The Case for Abolition
£9.99
Violent Phenomena: 21 Essays on Translation
£12.00
The Kurdish Women's Movement : History, Theory, Practice
£18.99
Mutual Aid: A Factor of Evolution
£7.49
Islam and Anarchism : Relationships and Resonances
£19.99
Freedom is a Constant Struggle
£9.99
Against the Law : Why Justice Requires Fewer Laws and a Smaller State
£10.99
Worshiping Power : An Anarchist View of Early State Formation
£12.00
ABOLISHING THE POLICE
£8.00
Abolition Geography : Essays Towards Liberation
£25.00
Class War: A Decade of Disorder
£10.99
Scorched Earth
£10.99
The Politics of Immunity : Security and the Policing of Bodies
£23.99
Britain's Empire : Resistance, Repression and Revolt
£14.99
Tangled in Terror : Uprooting Islamophobia
£9.99
The Trespasser's Companion: A Field Guide to Claiming What is Already Ours
£14.99
Strangers : Essays on the Human and Nonhuman (Extended Edition)
£12.99
Post-Capitalist Futures: Political Economy Beyond Crisis and Hope
£19.99
Resist The Punitive State
£12.99
Eduardo Galeano: Through The Looking Glass
£16.99
An Autobiography
£20.00
Styles of Radical Will
£14.00
Municipal Dreams : The Rise and Fall of Council Housing
£9.99
Libertarian Socialism: Politics in Black and Red
£23.99
The Failure of Nonviolence
£6.00
The War on Disabled People : Capitalism, Welfare and the Making of a Human Catastrophe
£12.99
Futurability : The Age of Impotence and the Horizon of Possibility
£9.99
Dancing In The Streets : A History Of Collective Joy
£9.99
Here to Stay : Eastern Europeans in Britain
£9.99
Welsh (Plural) : Essays on the Future of Wales
£12.99
An Abolitionist's Handbook : 12 Steps to Changing Yourself and the World
£16.99
The Rise of Eco Fascism
£14.99
Common Preservation : In a time of Mutual Destruction
£23.99
Don’t Mourn, Balkanize!: Essays After Yugoslavia
£17.99
A Mass Conspiracy to Feed People
£21.99
The Promontory People: An Early History of The Cornish
£12.99
We Still Here
£12.99
In Defence of Witches
£14.99
A little Gay History of Wales
£11.99
A World Without Police : How Strong Communities Make Cops Obsolete
£11.99
Post-Internet Far Right
£8.00
Can the Monster Speak? : A Report to an Academy of Psychoanalysts
£8.99
26 Voices for Change - A Cornish Anthology
£6.00
The Melancholia of Class: A Manifesto For the Working Class
£10.99
Duty Free Art : Art in the Age of Planetary Civil War
£9.99
We Want Freedom: A Life in The Black Panther Movement
£14.99
Twitter and Tear Gas : The Power and Fragility of Networked Protest
£10.99
Deep Sniff : A History of Poppers and Queer Futures
£10.99
Queer Theory and the Jewish Question
£30.00
Against Charity
£13.50
Augmented Exploitation : Artificial Intelligence, Automation and Work
£19.99
This One Wild and Precious Life : The Path Back to Connection in a Fractured World
£20.00
the Art of Cruelty
£12.99
Capital Hates Everyone : Fascism or Revolution
£12.99
Sexuality, Disability, and Aging : Queer Temporalities of the Phallus
£18.99
Decolonizing Israel, Liberating Palestine : Zionism, Settler Colonialism, and the Case for One Democ
£14.99
Antifascism, Sports, Sobriety : Forging a Militant Working-Class Culture
£13.99
Carceral Capitalism
£11.99
Human Rights and The Care of The Self
£20.99
A Survival Guide to the Misinformation Age : Scientific Habits of Mind
£18.99
Postcapitalist Desire: The Final Lectures
£12.99
Whipping Girl: A Transsexual Woman on Sexism and the Scapegoating of Femininity
£15.99
The Unsettling of Europe : The Great Migration, 1945 to the Present
£12.99
Men Explain Things to Me : And Other Essays
£12.99
This Is Not a Program
£12.99
The Mother of All Questions : Further Feminisms
£12.99
Whose Story Is This? Old Conflicts, New Chapters
£12.99
The Freedom to Be Free
£5.99
Begin Again: James Baldwins America and it´s Urgent Lessons for Today
£16.99
Red Star Over The Third World
£12.99
Economic Science Fictions
£17.99
Mask Off: Masculinity Redefined
£9.99
The Brutish Museums: The Benin Bronzes, Colonial Violence and Cultural Restitution
£12.99
The Shock of The Anthropocene
£11.99
Organizing for Autonomy : History, Theory, and Strategy for Collective Liberation
£14.99
Designing Disorder: Experiments and Disruptions in The City
£14.99
Making Abolitionist Worlds: Proposals for a World on Fire
£14.99
Pedagogy of The Oppressed
£9.99
Whites, Jews and Us
£11.99
China Goes Green : Coercive Environmentalism for a Troubled Planet
£15.99
Delirium and Resistance : Activist Art and the Crisis of Capitalism
£19.99
Judaism and Modernity
£9.99
Feeding Britain: Our Food Problems and How to Fix Them
£12.99
Black Marxism: The Making of the Black Radical Tradition
£12.99
A Field Guide to Getting Lost
£9.99
Aids : Don't Die of Prejudice
£14.99
Nomadic Theory : The Portable Rosi Braidotti
£28.00
Inventing Human Rights: A History
£12.99
Without a Net: The Female Experience of Growing Up Working Class
£11.99
Split: Class Divides Uncovered
£9.99
Decarcerating Disability: Deinstitutionalization and Prison Abolition
£23.99
Raising Free People : Unschooling as Liberation and Healing Work
£14.99
Direct Action & Sabotage: Three Classic IWW Pamphlets from the 1910s
£13.99
The Administration of Fear
£11.99
Aphro-ism: Essays on Pop Culture, Feminism, and Black Veganism from Two Sisters
£17.99
Pornotopia : An Essay on Playboy's Architecture and Biopolitics
£22.00
The War on Drugs and the Global Colour Line
£18.99
In Defense of Housing : The Politics of Crisis
£16.99
The Slow Burning Fuse : The Lost History of the British Anarchists
£23.99
Not As Nature Intended
£10.99
Is Racism an Environmental Threat?
£9.99
Wanderlust : A History of Walking
£9.99
Stop, Thief! : The Commons, Enclosures, And Resistance
£19.99
Disabled Futures
£22.99
Animals Like Us
£15.99
Abolition Democracy
£10.99
The Care Manifesto. The Politics of Interdependence
£8.99
The Meaning of Freedom : And Other Difficult Dialogues
£11.99