Anticolonial Eruptions : Racial Hubris and the Cunning of Resistance 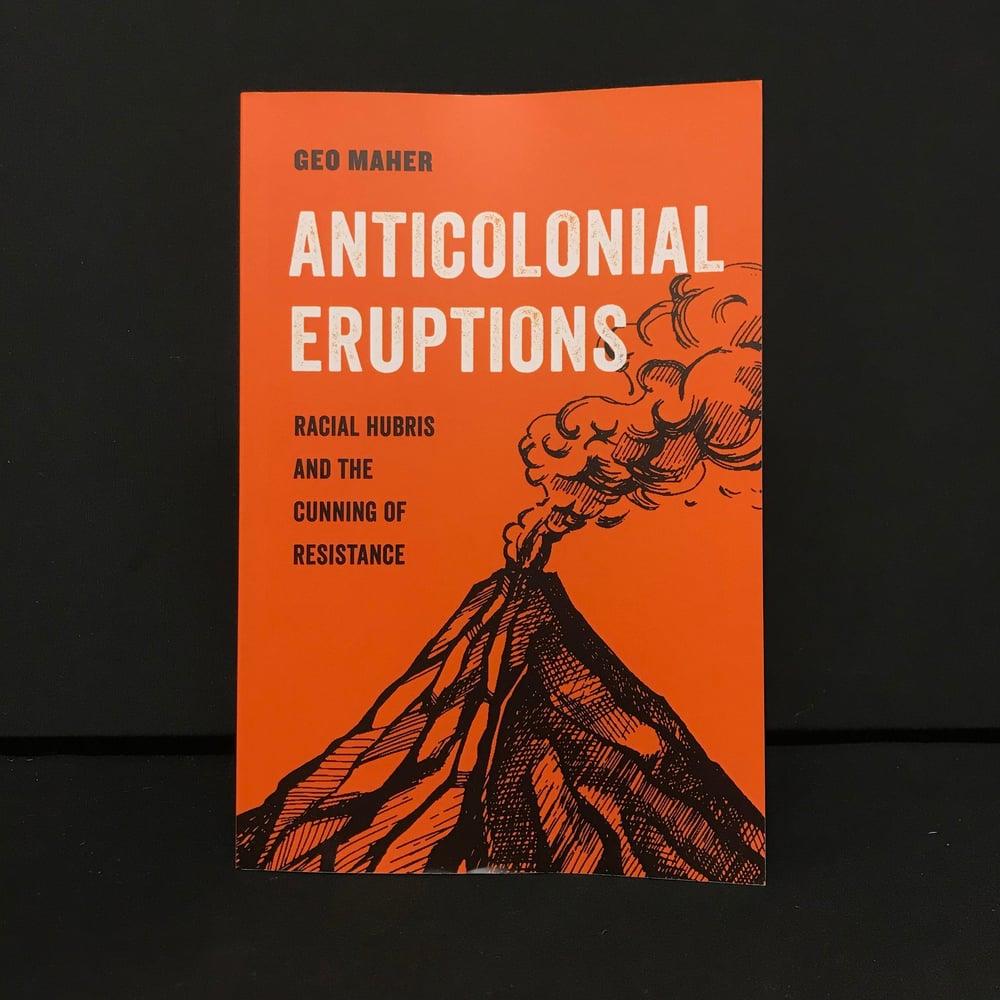 This incisive study reveals the fundamental, paradoxical weakness of colonialism and the enduring power of anticolonial resistance. Resistance is everywhere, but everywhere a surprise, especially when the agents of struggle are the colonized, the enslaved, the wretched of the earth. Anticolonial revolts and slave rebellions have often been described by those in power as "eruptions"-volcanic shocks to a system that does not, cannot, see them coming.

In Anticolonial Eruptions, Geo Maher diagnoses a paradoxical weakness built right into the foundations of white supremacist power, a colonial blind spot that grows as domination seems more complete. Anticolonial Eruptions argues that the colonizer's weakness is rooted in dehumanization. When the oppressed and excluded rise up in explosive rebellion, with the very human demands for life and liberation, the powerful are ill-prepared.

This colonial blind spot is, ironically, self-imposed: the more oppressive and expansive the colonial power, the lesser-than-human the colonized are believed to be, the greater the opportunity for resistance. Maher calls this paradox the cunning of decolonization, an unwitting reversal of the balance of power between the oppressor and the oppressed. Where colonial power asserts itself as unshakable, total, and perpetual, a blind spot provides strategic cover for revolutionary possibility; where race or gender make the colonized invisible, they organize, unseen.

Anticolonial Eruptions shows that this fundamental weakness of colonialism is not a bug, but a permanent feature of the system, providing grounds for optimism in a contemporary moment roiled by global struggles for liberation.

Published by University of California Press.

Home is Not A Place
£25.00
Comrade Sisters: Women of the Black Panther Party
£35.00
The Violence of Colonial Photography
£16.99
Collective Amnesia: Falmouth and The Transatlantic Slave Trade
£0.01 - £5.00
The Racial Code: Tales of Resistance and Survival
£20.00
Assata Taught Me: State Violence, Mass Incarceration, and the Movement for Black Lives
£16.99
Self-Defense: A Philosophy of Violence
£17.99
Against White Feminism
£9.99
Women's Activism in Africa : Struggles for Rights and Representation
£21.99
Claudia Jones: A Life in Exile
£15.00
Decolonial Marxism
£16.99
Against Borders : The Case for Abolition
£9.99
Violent Phenomena: 21 Essays on Translation
£12.00
Freedom is a Constant Struggle
£9.99
This is Why I Resist : Don't Define My Black Identity
£10.99
Anarchism and the Black Revolution : The Definitive Edition
£19.99
There Ain't No Black in the Union Jack : The cultural politics of race and nation
£14.99
The Groundings with My Brothers
£9.99
The New Age of Empire : How Racism and Colonialism Still Rule the World
£10.99
How Europe Underdeveloped Africa
£16.99
The Black Atlantic : Modernity and Double Consciousness
£12.99
The Good Arabs
£12.99
Back Trans Feminism
£22.99
Britain's Empire : Resistance, Repression and Revolt
£14.99
Tangled in Terror : Uprooting Islamophobia
£9.99
A Feminist Theory of Violence : A Decolonial Perspective
£12.99
An Autobiography
£20.00
Half-Caste and Other Poems
£6.99
Here to Stay : Eastern Europeans in Britain
£9.99
An Abolitionist's Handbook : 12 Steps to Changing Yourself and the World
£16.99
You Are Your Best Thing : Vulnerability, Shame Resilience and the Black Experience: An anthology
£14.99
Abolition. Feminism. Now.
£10.99
We Still Here
£12.99
Out Of Bounds: British Black & Asian Poets
£12.99
Sex and Lies
£12.99
We Want Freedom: A Life in The Black Panther Movement
£14.99
Romaphobia : The Last Acceptable Form of Racism
£14.99
Staying Power: The History of Black People in Britain
£16.99
Decolonizing Israel, Liberating Palestine : Zionism, Settler Colonialism, and the Case for One Democ
£14.99
Carceral Capitalism
£11.99
The Unsettling of Europe : The Great Migration, 1945 to the Present
£12.99
Begin Again: James Baldwins America and it´s Urgent Lessons for Today
£16.99
The Brutish Museums: The Benin Bronzes, Colonial Violence and Cultural Restitution
£12.99
Here to Stay, Here to Fight: A Race Today Anthology
£15.99
Making Abolitionist Worlds: Proposals for a World on Fire
£14.99
The Wretched of The Earth
£9.99
Whites, Jews and Us
£11.99
Black Marxism: The Making of the Black Radical Tradition
£12.99
Racism as Zoological Witchcraft : A Guide for Getting out
£17.99
Brit(ish) : On Race, Identity and Belonging
£9.99
Black Macho and the Myth of the Superwoman
£11.99
Feminism, Interrupted : Disrupting Power
£9.99
Aphro-ism: Essays on Pop Culture, Feminism, and Black Veganism from Two Sisters
£17.99
Fearing the Black Body : The Racial Origins of Fat Phobia
£21.99
Radical Virtuosity : Ana Mendieta and the Black Atlantic
£32.00
Wayward Lives, Beautiful Experiments - Intimate Histories of Riotous Black Girls, Troublesome Women,
£13.99
The War on Drugs and the Global Colour Line
£18.99
Innocent Subjects : Feminism and Whiteness
£17.99
Black and British: A Forgotten History
£12.99
Is Racism an Environmental Threat?
£9.99
Ain't I a Woman
£18.99
Your Silence Will Not Protect You
£12.99
Are Prisons Obsolete?
£10.99
Disabled Futures
£22.99
Sex Workers, Psychics, and Numbers Runners : Black Women in New York City's Underground Economy
£20.99