How to Kill a City: Gentrification, Inequality, and the Fight for the Neighborhood 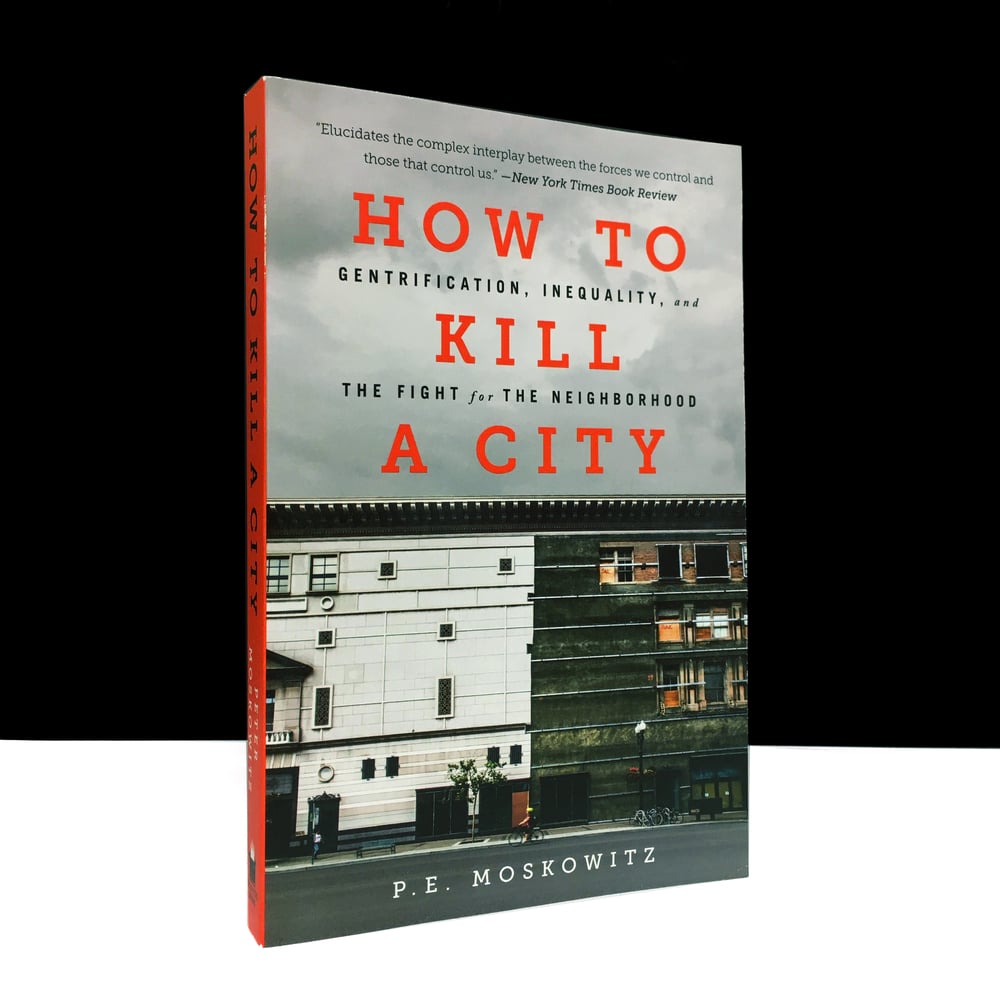 A journey to the front lines of the battle for the future of American cities, uncovering the massive, systemic forces behind gentrification — and the lives that are altered in the process.

The term gentrification has become a buzzword to describe the changes in urban neighborhoods across the country, but we don’t realize just how threatening it is. It means more than the arrival of trendy shops, much-maligned hipsters, and expensive lattes. The very future of American cities as vibrant, equitable spaces hangs in the balance.

Peter Moskowitz’s How to Kill a City takes readers from the kitchen tables of hurting families who can no longer afford their homes to the corporate boardrooms and political backrooms where destructive housing policies are devised. Along the way, Moskowitz uncovers the massive, systemic forces behind gentrification in New Orleans, Detroit, San Francisco, and New York. The deceptively simple question of who can and cannot afford to pay the rent goes to the heart of America’s crises of race and inequality. In the fight for economic opportunity and racial justice, nothing could be more important than housing.

A vigorous, hard-hitting expose, How to Kill a City reveals who holds power in our cities-and how we can get it back.

A Mass Conspiracy to Feed People
£21.99
We Still Here
£12.99
Anarchist Encounters: Russia in Revolution
£12.99
We Are 'Nature' Defending Itself
£14.99
There Is Nothing So Whole As A Broken Heart : Mending the World as Jewish Anarchists
£15.00
We Want Freedom: A Life in The Black Panther Movement
£14.99
ABOLISHING THE POLICE
£8.00
Fighting Fascist Spain : Worker Protest from the Printing Press
£20.99
Twitter and Tear Gas : The Power and Fragility of Networked Protest
£10.99
The Faggots & Their Friends Between Revolutions
£12.99
Story Of The Iron Column : Militant Anarchism in the Spanish Civil War
£13.00
Staying Power: The History of Black People in Britain
£16.99
Anarchism and It's Aspirations
£9.00
Antifascism, Sports, Sobriety : Forging a Militant Working-Class Culture
£13.99
Human Rights and The Care of The Self
£20.99
Marx And Nature : A Red Green Perspective
£14.99
Reasons in Revolt: Marxism Philosophy and Modern Science
£14.99
Moving Against the System: The 1968 Congress of Black Writers and the Making of Global Consciousnes
£17.99
Organizing for Autonomy : History, Theory, and Strategy for Collective Liberation
£14.99
Here to Stay, Here to Fight: A Race Today Anthology
£15.99
Revolutionary Yiddishland: A History of Jewish Radicalism
£9.99
Naija Marxism
£9.99
Care Work : Dreaming Disability Justice
£13.99
What About Activism?
£17.95
THE CNT IN THE SPANISH REVOLUTION. VOLUME 1
£19.99
Mutual Aid : Building Solidarity During This Crisis (and the next)
£8.99
Anarchists Never Surrender: Essays, Polemics, and Correspondence on Anarchism, 1908-1938
£17.99
Racism as Zoological Witchcraft : A Guide for Getting out
£17.99
Wageless Life : A Manifesto for a Future beyond Capitalism
£8.00
How To Do Nothing : Resisting the Attention Economy
£12.99
Grand Union: Accidental Anarchists or Downtown Dance 1970-76
£20.50
How to Blow Up a Pipeline : Learning to Fight in a World on Fire
£10.99
Rosa Luxemburg and the Struggle for Democratic Renewal
£8.50
The Aesthetic Of Our Anger : Anarcho-Punk, Politics and Music
£17.95
Breaking the Spell: A History of Anarchist Filmmakers, Videotape Guerrillas, and Digital Ninjas
£22.99
The Day The Country Died : A History of Anarcho Punk 1980 to 1984
£21.99
Raising Free People : Unschooling as Liberation and Healing Work
£14.99
Direct Action & Sabotage: Three Classic IWW Pamphlets from the 1910s
£13.99
Occult Features of Anarchism
£13.99
A Billion Black Anthropocenes or None
£8.00
The Anarchist Encyclopedia
£18.50
X: Straight Edge And Radical Sobriety
£19.99
Being Numerous : Essays on Non-Fascist Life
£12.99
The Slow Burning Fuse : The Lost History of the British Anarchists
£23.99
The Anarchist Roots of Geography : Toward Spatial Emancipation
£20.99
Wobblies of The World
£15.00
Not As Nature Intended
£10.99
The Ecology Of Freedom: The Emergence and Dissolution of Hierarchy
£19.95
Are Prisons Obsolete?
£10.99
Stop, Thief! : The Commons, Enclosures, And Resistance
£19.99
The Uprising : On Poetry and Finance
£11.99
The Meaning of Freedom : And Other Difficult Dialogues
£11.99
Futures of Black Radicalism
£19.99
Eco-Deconstruction: Derrida and Environmental Philosophy
£24.99
African Anarchism: The History of a Movement
£12.99
Marxist-Feminist Theories and Struggles Today : Essential writings on Intersectionality, Labour and
£21.99