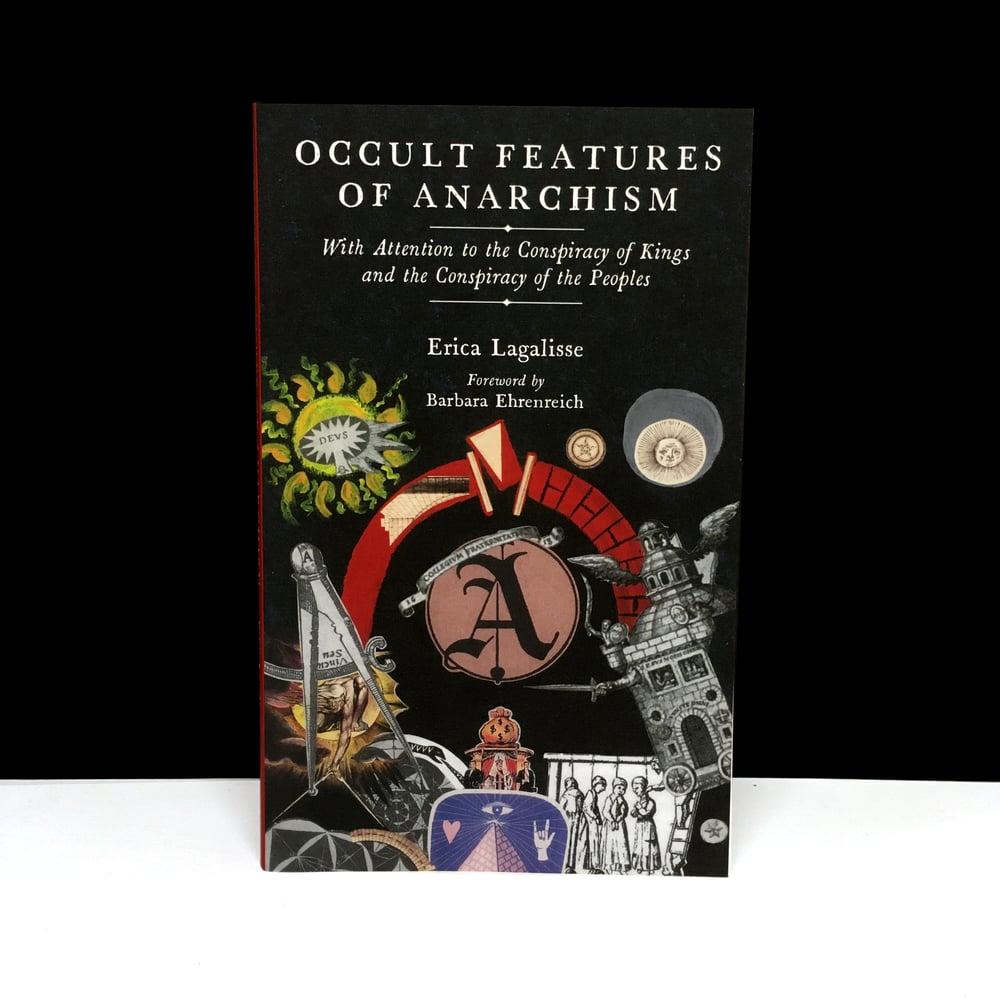 In the nineteenth century anarchists were accused of conspiracy by governments afraid of revolution, but in the current century various “conspiracy theories” suggest that anarchists are controlled by government itself. The Illuminati were a network of intellectuals who argued for self-government and against private property, yet the public is now often told that they were (and are) the very group that controls governments and defends private property around the world. Intervening in such misinformation, Lagalisse works with primary and secondary sources in multiple languages to set straight the history of the Left and illustrate the actual relationship between revolutionism, pantheistic occult philosophy, and the clandestine fraternity.

Studying anarchism as a historical object, Occult Features of Anarchism also shows how the development of leftist theory and practice within clandestine masculine public spheres continues to inform contemporary anarchist understandings of the “political,” in which men’s oppression by the state becomes the prototype for power in general. Readers behold how gender and religion become privatized in radical counterculture, a historical process intimately linked to the privatization of gender and religion by the modern nation-state.

Militant Anti-fascism : A Hundred Years of Resistance
£14.95
Brigadistes: Live for Liberty
£12.99
Architecture and Anarchism: Building without Authority
£25.00
Decolonizing Anarchism: An Antiauthoritarian History of India's Liberation Struggle
£12.00
Cooking Up a Revolution : Food Not Bombs, Homes Not Jails, and Resistance to Gentrification
£21.00
The Nation On No Map : Black Anarachism and Abolition
£11.00
Mutual Aid: A Factor of Evolution
£7.49
Islam and Anarchism : Relationships and Resonances
£19.99
Freedom is a Constant Struggle
£9.99
Anarchism and the Black Revolution : The Definitive Edition
£19.99
The Groundings with My Brothers
£9.99
Worshiping Power : An Anarchist View of Early State Formation
£12.00
ABOLISHING THE POLICE
£8.00
Abolition Geography : Essays Towards Liberation
£25.00
Disability Visibility
£12.99
Back Trans Feminism
£22.99
Class War: A Decade of Disorder
£10.99
Animal Liberation
£17.99
Resist The Punitive State
£12.99
An Autobiography
£20.00
The Failure of Nonviolence
£6.00
The Sociology of Freedom
£25.99
Occupation Culture: Art and Squatting in the City from Below
£17.00
Anarchist Cuba
£21.99
The Solutions Are Already Here
£16.99
The Spanish Anarchists: The Heroic Years 1868–1936
£13.95
The Rise of Eco Fascism
£14.99
Common Preservation : In a time of Mutual Destruction
£23.99
A Mass Conspiracy to Feed People
£21.99
We Still Here
£12.99
Anarchist Encounters: Russia in Revolution
£12.99
We Are 'Nature' Defending Itself
£14.99
There Is Nothing So Whole As A Broken Heart : Mending the World as Jewish Anarchists
£15.00
We Want Freedom: A Life in The Black Panther Movement
£14.99
Fighting Fascist Spain : Worker Protest from the Printing Press
£20.99
Twitter and Tear Gas : The Power and Fragility of Networked Protest
£10.99
The Faggots & Their Friends Between Revolutions
£12.99
Story Of The Iron Column : Militant Anarchism in the Spanish Civil War
£13.00
Staying Power: The History of Black People in Britain
£16.99
Anarchism and It's Aspirations
£9.00
Antifascism, Sports, Sobriety : Forging a Militant Working-Class Culture
£13.99
Human Rights and The Care of The Self
£20.99
Marx And Nature : A Red Green Perspective
£21.99
Reasons in Revolt: Marxism Philosophy and Modern Science
£14.99
Organizing for Autonomy : History, Theory, and Strategy for Collective Liberation
£14.99
Here to Stay, Here to Fight: A Race Today Anthology
£15.99
Revolutionary Yiddishland: A History of Jewish Radicalism
£9.99
Care Work : Dreaming Disability Justice
£13.99
What About Activism?
£17.95
THE CNT IN THE SPANISH REVOLUTION. VOLUME 1
£19.99
Mutual Aid : Building Solidarity During This Crisis (and the next)
£8.99
Anarchists Never Surrender: Essays, Polemics, and Correspondence on Anarchism, 1908-1938
£17.99
Racism as Zoological Witchcraft : A Guide for Getting out
£17.99
Wageless Life : A Manifesto for a Future beyond Capitalism
£8.00
How To Do Nothing : Resisting the Attention Economy
£12.99
How to Kill a City: Gentrification, Inequality, and the Fight for the Neighborhood
£13.99
How to Blow Up a Pipeline : Learning to Fight in a World on Fire
£10.99
Breaking the Spell: A History of Anarchist Filmmakers, Videotape Guerrillas, and Digital Ninjas
£22.99
The Day The Country Died : A History of Anarcho Punk 1980 to 1984
£21.99
Raising Free People : Unschooling as Liberation and Healing Work
£14.99
Direct Action & Sabotage: Three Classic IWW Pamphlets from the 1910s
£13.99
The Anarchist Encyclopedia
£18.50
X: Straight Edge And Radical Sobriety
£19.99
The Slow Burning Fuse : The Lost History of the British Anarchists
£23.99
The Anarchist Roots of Geography : Toward Spatial Emancipation
£20.99
Not As Nature Intended
£10.99
Are Prisons Obsolete?
£10.99
Stop, Thief! : The Commons, Enclosures, And Resistance
£19.99
The Uprising : On Poetry and Finance
£11.99
The Meaning of Freedom : And Other Difficult Dialogues
£11.99